We know that times have changed and we found some of the best authentic and realistic Wonder Woman costumes for women because here at Superheroes Central  we can remember when dressing up as your favourite superhero was a pastime usually reserved for men and boys(and it sometimes made you the object of ridicule), but ever since the awesome trend of fantastic superhero movies, more and more women and girls are getting into the spirit of things and dressing up as their favourite super heroine aswell. And ladies if you are gonna dress up in costume as a kick ass super hero, then yes Wonder Women is a great choice she really is an incredibly powerful super hero. Her real name is Diana Prince and she is an Amazonian princess, who has many abilities, not least among them, super strength, super endurance, magical weapons, not many people are aware of this, but she could actually give Superman a run for his money with a pretty decent chance of beating the man of steel! Not many superheroes have that kind of power level which is why she started the Justice League of America with Superman, Batman, Aquaman, Green Lantern, the Flash and the Martian Manhunter.  If you want to know more about Wonder Woman’s powers and abilities than click here. If you find a costume that you love but it doesn’t have everything you need or you just want make it better, don’t worry because we found some great Wonder Woman accessories that will have you looking like the real deal.

Woman Costume Ideas For The Adults

As we said earlier Wonder Woman is a great costume choice for woman, and here are some of the best Wonder Woman costume ideas for the adults. She’s been around since 1940 and is the definitive female superhero, she’s strong, sexy and resourceful. The only question is what’s the best look, her classic outfit is one of the most iconic costumes, easily recognizable by just about everyone as this is what she wore in the comic books and in many animated series for the better part of 70 years, it is also the look that made Lynda Carter a superstar and sex symbol in the 70’s so if you pick a costume based on this design you can’t go wrong.

The other Wonder Woman costume choice is the outfit she wore in the movie Batman vs Superman, and which she has appeared in more recent comics wearing similar garb, now while not as widely recognizable as her original costume it does have one thing going for it, and this one thing cannot be overstated enough, she just looks so bad ass in her new threads. she finally looks like a classic Greek Amazonian warrior princess, and looks like she can kick some serious butt(which she really can) so while not the classic choice, it is one for the times.

Ever since Batman vs. Superman, our Amazonian warrior princess has been rocking an awesome new look, and this Dawn of Justice Wonder Woman is a revamped version of that badass outfit. The main part of the costume is styled to resemble antiquated armor which makes her look like a kickass Greek Amazonian warrior, they have made a shift away from the darker tones of the earlier version, and included the vibrant red, blue and gold of her traditional outfits, and the result is truly stunning. It also comes with quality accessories including a detailed golden tiara and armband, aswell as a pair of authentic bracer/gauntlet combination and a striking pair of boot tops which really completes the look. this product has received lots of reviews with most people being impressed with both the fit and quality, it really is the best Dawn Of Justice Wonder Woman costume for the adults.

If you love Halloween or costume parties and you love being the centre of attention, than this sexy Wonder Woman costume is for you. This sexy outfit draws it’s inspiration from her very first appearance in Sensational Comics in January 1942. This costume this has the original star spangled skirt, with a red corseted top sporting the stylized golden eagle insignia formed by the double W’s of Wonder Woman’s initials. Also included in this package are a golden belt, and golden tiara as well as a quality short red cape with insignia and a pair of bracelets which round out the costume. Made from polyester and spandex it is truly authentic Wonder Woman outfit that has received overwhelmingly positive reviews from those ladies who have bought it, with many people remarking on the quality and good fit, just a really great sexy superhero costume for women and well worth consideration. 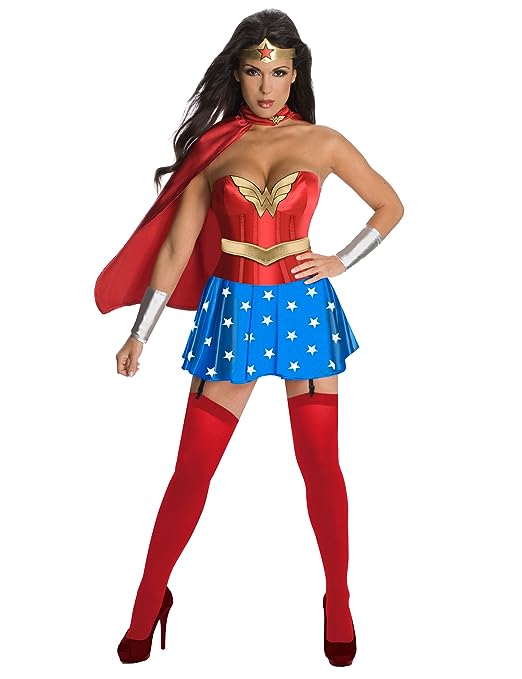 This authentic Wonder Woman classic costume is those women who remember Linda Carter fondly or even if you are too young to remember that siren of the seventies. It comes with iconic blue and white star spangled shorts as well a good quality red top with gold trim, a small red cape aswell as a gold headband and of course the bulletproof bracelets(well their not really bullet proof but hers are), it’s made from a mix of polyester and spandex This product has been bought and reviewed by a huge amount of satisfied customers, who overwhelmingly cited the quality of the costume and the great fit, this truly is the best costume for fans of the classic look.

This great Wonder T-shirt, cape and headband costume is perfect for those who want to dress up for a costume party but want to stay casual about it, it really allows you be part of the fun without going to too much trouble. A stunning red shirt emblazoned with the Wonder Woman motif, and iconic bodice, belt and shorts, combined with a heroic red cape and golden headband means there will no doubt that you are there as everyone’s favourite Amazonian princess. the shirt is made from 100% cotton and the cape is a 100% polyester. Aside from being a simple and easy costume to use the other thing that really grabbed our attention was the fact that it had reviewed by a lot of people and the comments were overwhelmingly positive, one thing that was mentioned in both the good as well as the few poor reviews was the fact that the sizes run small and you may want to order a larger size than you normally would. Apart from that people really enjoyed this casual Wonder Woman costume.

Wonder Woman Costumes Over The Years

Wonder Woman has been around since 1942 and most of us are aware her costume in film and television has changed so much in recent years from what had been  previously. But as radical as her new look seems, it’s nothing compared to her evolution in over 70 years of comics. We were surprised by some of her awesome outfits and we thought we’d share, so have a look for yourself and enjoy.