If you are looking for the best authentic and realistic Thor costumes for men. Then you have come to the right place as we have reviewed a great selection of Amazon products.  The god of thunder, son of Odin the Allfather and smiter of evil doers since 1962 and has been a staple of comics for over 50 years, he now finds himself a movie star appearing in his own Thor franchise of films aswell being vital member of the Avengers in that franchise aswell. Let’s face it who doesn’t love him, with his muscular build and flowing blonde locks, not to mention he is an immortal, nigh indestructible god who can fly and call down devastating bolts of lightning to vanquish his foes, all the while wielding his mighty battle hammer Mjölnir.  So those of us at Superheroes Central have taken the liberty of reviewing the pros and cons of some the great Thor costumes for adults available in a range of sizes.

Thor Costume Ideas For The Adults

Below we have made a made with some great Thor costume ideas for the adults. Thor is now a major figure of pop culture, mostly thanks to efforts Australian actor Chris Hemsworth who’s rugged good looks, on screen presence and previously undiscovered comedic timing has endeared him to audiences everywhere. As you would expect from a character that has been around for over 50 years there have been many versions of the hero who is the strongest Avenger(at least according to him). Although some incarnations look very different from his class comic incarnation one thing always remains and that is the mighty war hammer Mjölnir.

I hope these reviews have help you select the right Thor costume that suits your needs, remember some of these costumes come with various props and others don’t. For a Thor to really look the part there are certain things that you absolutely must have, firstly and most importantly you must be wielding the mighty an authentic looking hammer Mjölnir, and second it really helps if you have Thor’s long flowing blonde hair so for a realistic Thor wig click here. .

First up we have the best Thor cosplay costume which is for those who really want to amaze their friends at parties and conventions alike. Made from comfortable polyester this two piece costume is styled in a classic Thor look from the comics of yesteryear. The costume includes a black and metallic tunic which is padded out for those of us lacking appropriately heroic looking physiques, and it also comes with pants, helmet, moulded realistic looking boot tops and is rounded out with quality red cape. The only thing missing is the hammer Mjölnir which you will have to purchase separately. We really love the look of this costume because it is a faithful and authentic recreation of the Thor that appeared in the original comics, and although it is expensive it really is the best Thor cosplay costume for the most fanatical Asgardian. 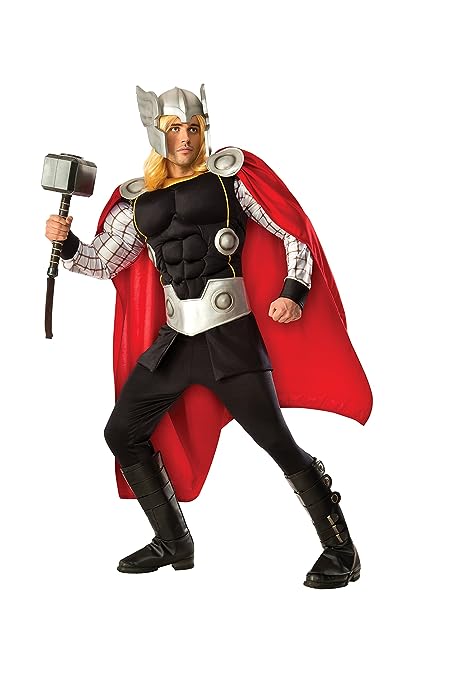 This authentic Thor Age of Ultron costume is a full fitting polyester  costume  is a convenient two piece set that is based off the style shown in the Avengers movie with the top half being a long sleeve shirt which has a print on it that looks like armour, and it is also padded out to give the appearance of a muscular anatomy, which looks very cool. The shirt has an open back affixed with velcro and covered by a long flowing red cape. The bottom pants half has a print on it that matches the armoured appearance of the top half and also has a 3 dimensionally  molded boots theme aswell. Worn together you totally will look like the God of Thunder. It must be mentioned however that the wig and hammer shown in the image are not included and must be purchased separately. A very affordable authentic Thor costume that is sure to impress as customers gave it some very positive reviews. 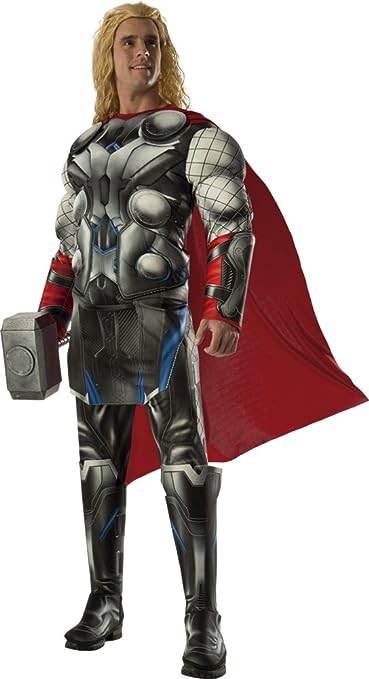 This real Thor costume is very similar to the previous ones but with a few differences, firstly the style of the costume is more of a traditional Thor look sometimes seen in the comics rather than the big screen. Although the styling is different to the previous costume, it is essentially another polyester jumpsuit, padded out with those handy looking muscles, and includes a cape and wig. A simple and affordable design but one that people loved with this real Thor costume receiving plenty of positive comments. 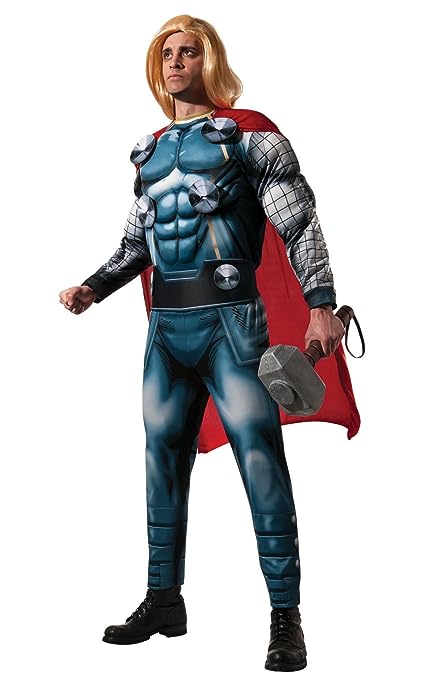 Next up we a have a realistic costume based on the Thor:Ragnarok  movie it is a comfortable polyester shirt with a very impressive print that realistic resembles actual  armour, obviously this  costume has distinct style differences from the other examples. The shirt is padded with foam inserts out to resemble a well muscled chest rippling with definition,it also has inserts in the shoulder and arms to truly create the illusion of a god like physique, something we all aspire too but few of us achieve. Also the cape is still detachable, and is a long flowing affair which lends a certain impressive look, another noticeable difference is that the costume is full body affair which really makes it a very striking and realistic Thor costume for adults, it really does look great and has received overwhelmingly positive feedback from customers who purchased it. 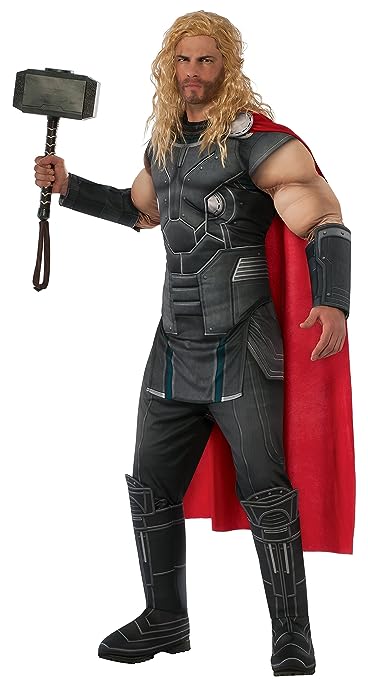 This cheap Thor T-shirt costume is styled after the movie version of Thor and is suitable for both Men and Ladies(yes that’s right Jane Foster is currently the God of Thunder in the marvelverse right now).  It is a comfortable and simple polyester men’s sized T-shirt with a print on it resembling armour and a short little red cape which is attached by Velcro and is easily detachable which is useful when when it’s time to wash. The short cape is great as it won’t become entangled around your legs allowing for an active range of motion while in costume, which makes this the best Thor costume for dressing up for kids or office parties, lots of fun without the hassle and the added advantage of being cheap. 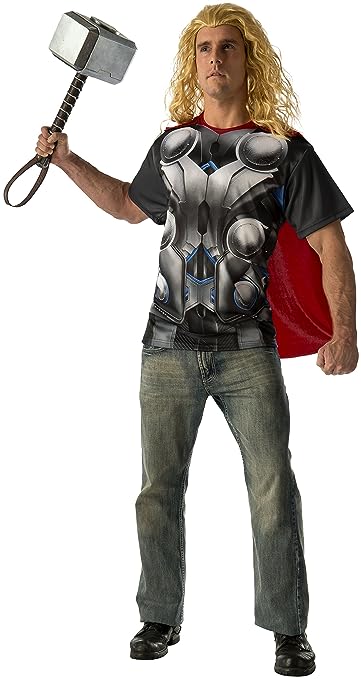 All Thor’s Armours In The Movies

As we mentioned earlier Thor is now a genuine movie star in his right, his success in the box office puts him right along side other movie superheroes staples such Batman, Superman, and Spiderman. Most of the credit belongs to just one man, and that of course is Chris Hemsworth. A relatively unknown Australian actor who is now a genuinely bankable star, Hemsworth’s combination of ridiculously muscular and perfect physique, handsome looks, charm and hilarious comedic ability has made the God of Thunder a household name. Below are some great scenes from the movies which showcase some of the best realistic and authentic Thor armours.

Who Is The Real Thor

Just who is the real Thor? He first appeared 1950 in a brief appearance but it would be 12 more years until the Thor we now know really entered the spotlight. He was created by Don Rico, Stan Lee, Jack Kirby and Larry Lieber. And the origins of the character and why he is on earth differ somewhat between the comic book and the movie. While it’s true that in both cases Odin the all father banished Thor to teach him humility, the movie version just sees him stripped of his godlike powers and made mortal until such time as he proves himself worthy of the mighty hammer Mjölnir which will restore his Godhood. Pretty simple right?

Well the comics is a somewhat more convoluted tale because Odin doesn’t just send Thor to earth stripped of his powers he also traps him the body of partially crippled yet gifted surgeon Donald Blake(who started life as a magical shell for Thor but would eventually achieve an independence and sentience of his own) and disguised Mjölnir as a walking stick. Thor would switch between his Crippled Donald Blake form and his true Asguardian form as needs dictated, this confusing state of affairs persisted in the comics for decades until the two character were separated. So in answer to who the real Thor is? the answer is easy, he’s the one and only God of Thunder son of Odin.

Seriously though Thor is a great choice for a costume because not only is he one of most powerful superheroes in the Marvel Universe he is also a founding member of the Avengers, a group of Earth’s mightiest heroes including Captain America, the Hulk, Black Widow, Iron Man and Spiderman .Make sure to checkout the origins of Thor here so you can Impress your friends at your party