At Superheroes Central we’ve found a heap of the best authentic and realistic Black Widow costumes for women to have a look at and hopefully there’ll be something right for you.We’ve all seen the incredible Avengers movies, aswell the other fantastic marvel films, they have really breathed life into the characters from the comics, and the coolest female character so far without a doubt is the Black Widow, she is a complex and pivotal part of the ongoing Avengers saga, and so with that in mind

Whether you are a comic book fan or one the legion of new movie fans we have found some adult Black Widow costume ideas for the adults,  we only selected a few, but the reason for this is that while there so many fantastic looking costumes out there, we really go for the ones that people review and rate highly. Because at Super heroes central our goal is to make your experience with whatever product you are looking to buy, a positive one. So yes absolutely, great visual aesthetics are a must, another must is great costumer feedback.

Remember depending on how serious you are about you costume, you may wish to upgrade some of featured accessories using the main jumpsuit portion a starting point for your ensemble. Or you may wish to add items like prop gun holsters and guns(as they are not included in the costumes below, but they are definitely part of Natasha’s arsenal) another item shown but not included are collapsible riot control batons(well okay the prop versions) which could really set your costume off.

And last but not least if you want to really look like the Black Widow then remember she is always a red head so none of the costumes come with wigs so make sure you order one when buying your costume. So have a look and see if anything grabs your attention from the three costumes we found for you. Have fun.

First up we have brought you what we thought was potentially the best Black Widow costume for sale out of the three of them, and yes you may disagree but the reasoning is simply that while the previous two costumes rock, they are modelled on a more classic comic book look which is great for fans of the comics(which we are) but it’s the movies that really brought Natasha Romanova into the spotlight, and in this costume you really look like you stepped of the big screen. The print on this unique jumpsuit is from Avengers: Age of Ultron  and what makes it stand apart from the others is that in this costume you really do look like you are working for a secret government organization like S.H.I.E.L.D,(it really is an authentic looking uniform), it also comes with a belt and wrist bracers to complete the ensemble. Another hugely popular costume people really got a lot of enjoyment out it, and shared overwhelmingly positive feedback, so if you want to look like Scarlett Johansson for a night (or better) than this is the best Black Widow costume for you.

Without a doubt the sexiest superhero in the Avengers is the Black Widow, and for ladies out there who want to feel sexy at the there next costume party then this sexy Black Widow costume is for you. The main part of the costume is a black coloured blended spandex and polyester jumpsuit and comes with other accessories including a pair of belts with stylized buckle and a pair of wrist bracers, the costume is hugely popular and has been bought and reviewed by numerous happy costumers and it shows just how good this costume is when you read the reviews and see the rating it has received(It’s pretty high). Some of the helpful tips included mention of the fact that fact the material is quite stretchy and when ordering if you unsure of the size you want, perhaps it would be better to order a little on the small side, so as to get that form hugging look that will knock peoples socks off(although it was mentioned that the outline of underwear worn underneath does have a tendency to show a little, so be prepared), but still this Black Widow costume for sale is great for those sexy women out there with gorgeous figures, and you’ll have a lot of fun in this. 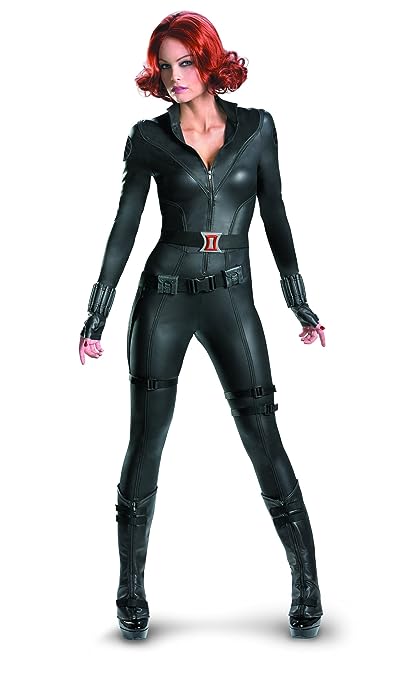 Although this next authentic Black Widow costume for the adults is another form fitting black jumpsuit, but it isn’t as unforgiving as the previous costume, as it doesn’t cling quite so snugly and a few imperfections will not be quite so noticeable, a great compromise suit for ladies with great figures but don’t want to put it all out there. It comes with stylized belt and knee pads and molded boot tops. Another great costume positively received by those who bought it rated well with people really loving it, the only theme that ran through the comments section was the fact that if you have a long torso it may be worth ordering a slightly larger size as the costume it self runs a little short in that area. 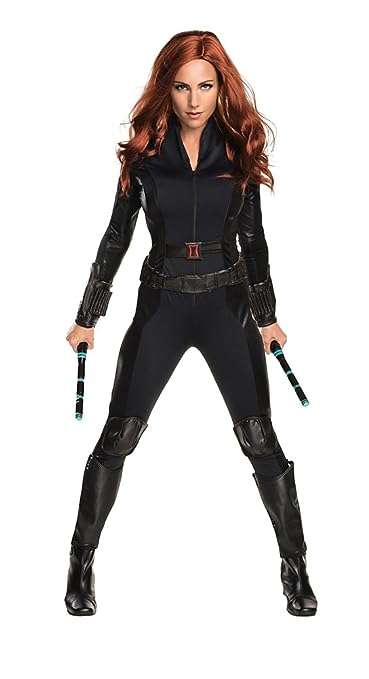 If you know anything about comic book characters or their cinematic counterpart, than you know that origin stories once set in stone are now in a state of flux, with most characters receiving revised or updated stories or part the unending quest to stay relevant and fresh(aswell as boost sales by rebooting fictitious comic book universes). But here we have found this great video that tells the original tale of the Avenger’s Black Widow’s history. It features her original costume(and yes it does look quite different).So we hope you’ll find it as interesting as we did. Enjoy

Black Widow or Natasha Romanova to those in the know, a former highly trained KGB assassin and super villain (well maybe not super, but still incredibly badass). She is  highly trained and incredibly motivated and is always a boon to the team bringing her stealth and intelligence gathering capabilities to the Avengers aswell incredible fighting skills, every bit as formidable as Captain America , Black Panther and Iron Man, she has also had personal relationships with Hawkeye and Daredevil and although she is undeniably beautiful, be warned, you underestimate the Widow at your own peril.