If you’re looking for some of the best authentic and realistic Batgirl costumes then at Superheroes Central we have found a great selection for fans of the one of the most popular and iconic female super heroes ever. First appearing way back in 1967 in Detective Comics #359, Batgirl was originally Gotham City’s police chief Jim Gordon’s daughter, Barbara Gordon(not that he knows that), created by and wearing a costume designed by Carmine Infantino, and in that story she first created her costume for a policeman’s ball, and not as a superheroes disguise, but on her way to the ball she came to Bruce Waynes rescue(not that he was ever truly in danger), but did provide him with a distraction to allow Bruce to change into his alter ego Batman. And ever since that fateful encounter which she regularly teamed up with Batman and Robin fighting villains like the Joker and Catwoman, and even having a romantic relationship with Dick Grayson’s Robin. Indeed Barbara was the Batgirl right up until 1988 when the Joker shot and crippled her in her civilian identity in the acclaimed graphic novel The Killing Joke written by Alan Moore. And although Barbara’s stint as Batgirl would end for the next 30 years, other woman would come to pick up the iconic mantle and wear the Batgirl costume, until Barbara Gordon’s return.  And now with our help in finding some of the best Batgirl costumes out there you too could be the one to wear the fabled costume.

Batgirl Costume Ideas For The Adults

So obviously you are a big fan and are looking foe some great Batgirl costume ideas for the adults, well we’ve put together a few. Firstly we should mention that this is a page dedicated to Batgirl and not to the similarly garbed but completely separate and different character Batwoman, who shares similar costume design elements but instead of her accessories and trim being gold, Batwoman’s are red. So now that we’ve cleared that little point up, here are some of the ideas we’ve got, firstly that we tried to pick mostly authentic and quality costumes that you’ll look fantastic in and for costumes that others have bought and shared their positive experiences. We have also included on our list one costume that is a quick and easy solution for those who don’t want to either spend either a lot of time or money getting in character for their costume party but still want to have fun. So next we have also included two outfits which are based of Carmine Infantino’s original depiction and style of costume, these sleek and stylish costumes are essentially a black jumpsuit(or dress) with gold trim, and finally but certainly not in the least is Batgirl costume that most die hard fans would both know and love, and that of course is the purple and gold costume from the iconic 60’s cult show Batman and worn by the glamorous and sexy Yvonne Craig.Realistic Batgirl Cosplay Costumes

First up for all you fangirls out there we have this stunning realistic Batgirl cosplay costume, which was originally worn by the beautiful Yvonne Craig who plated Barbara Gordon in the classic 60’s television series Batman. This incredible costume is identical to the one seen on TV, it’s the complete purple jumpsuit with the reverse yellow/purple cape, and yellow belt and bat emblem, and it also comes with a great detached headpiece with attached red wig to really add a whole new dimension to this costume(in the television series Barbara Gordon wasn’t a natural red head but wore the wig to further disguise herself) Of all the costumes we reviewed, those who bought this one gave it the highest approval rating at the time of writing this article, and why not? This version of the Batgirl costume is iconic and a part of pop culture, and many us of were first introduced to the character from the television series. Hugely loved and well received, people who wore this costume were the centre of attention everywhere they went. It just simply is the best and authentic of the Batgirl cosplay costumes out there. 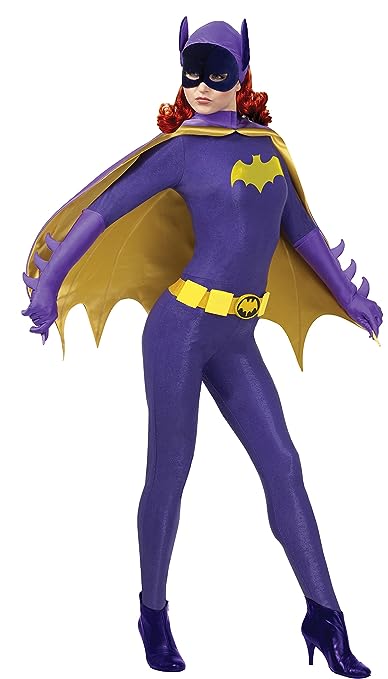 Another great addition to this list is this super authentic Batgirl costume for sale, which of all the costumes selected really struck us as the closest thing to Carmine Infantino’s original design from the comics and although there are slight differences they are slight(originally Batgirl had a blue cowl and cape identical to Batman’s but over time the colours have varied slightly). So this amazing costume is nice form fitting black body with attached black hood, and all the yellow trimming like the gloves, boots and belt also part of the body suit. It just looks fantastic, wearing this you look like you stepped right off the pages a comic book . So a few things that are not so great is the lack of a cape which will have to bought separately to the costume, in the comics it’s actually a reverse sided yellow/black cape, and fortunately we were able to find one like that for sale and inserted a link. But actually either a yellow or a black cape works really well with this costume. And the other point worth mentioning is this great costume has been reviewed by lots of people and although there were lots of positive comments, a common theme running through the review was the fact that costume runs small compared to the size chart so it may be worth thinking about buying a size bigger than you would normally. Other than that we really loved this authentic Batgirl costume and we think you will too. 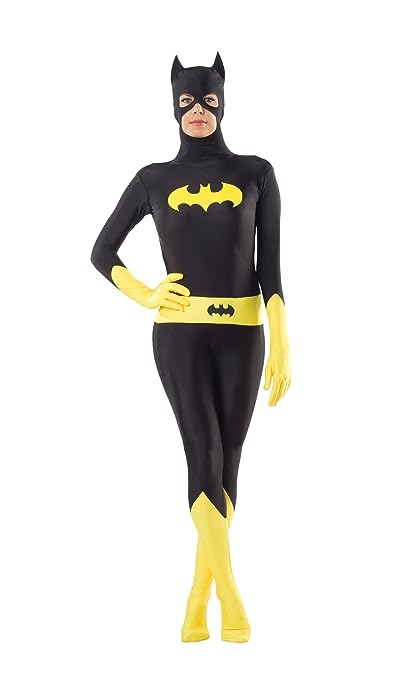 When we saw this Batgirl costume for women we absolutely loved it, and it seems we weren’t alone, hugely popular with people it has been reviewed several hundred times and woman just love it with an overwhelming amount of them saying how great they looked and felt, and were very happy with the size they ordered as it was exactly as advertised, indeed there were nearly no negative comments. This great looking Batgirl costume is a very feminine take on the original costume, it’s a sexy black dress that is mini skirt length and comes with lots of great accessories that really give this outfit a sense of quality, it includes a detached black mask, black armbands and knee high boot tops aswell and yellow vinyl Batgirl utility belt that just looks amazing and a really cool yellow vinyl Batgirl emblem centred on the chest. what we loved was that in this you look super sexy, but yet still look like a real crime fighting superhero, just one of the best Batgirl costumes for women. 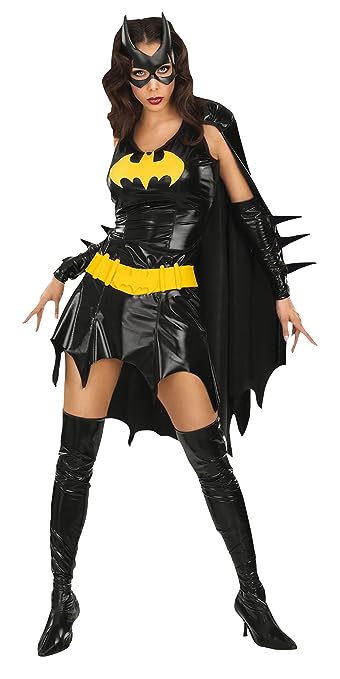 This quick and easy batgirl costume is perfect for mum’s who want to get in the swing of things and look great for their kids, whether it is Halloween or a kids birthday party without spending a lot money or going to too much effort, it is also great for party girls who want to have fun without the hassle. Made from polyester this simple Batgirl costume is a simple T-shirt with printed female costume design, which also comes with a black plastic Batgirl mask and a detachable blue cape affixed with Velcro. So many people have bought and reviewed this product and loved both it’s simplicity and it’s price point, and there’s no doubt that you’ll look great in this really easy batgirl costume which is the best for those who just want to have a good time. 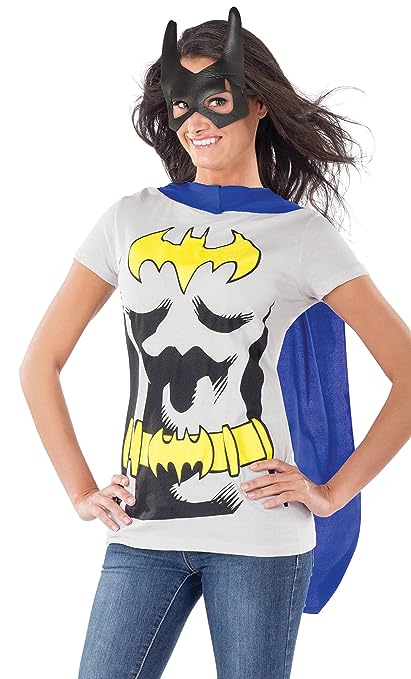 Over the year there have been several similar but yet slightly different Batgirl costumes, and although which is your favourite is up to you, our absolute favourite was the black jumpsuit with yellow trim, but we’ll always have a soft spot for classic 60’s television Batgirl. So have a look at this short video we found and decide for yourself which costume is your favourite.