At Superheroes Central we have tried to find some of the best sexy and plus size Captain America costumes for women out there, because the star spangled Avenger is one the most iconic and enduring superheroes ever. Very few costumes evoke and real sense of patriotism and pride in the United States as the costume worn by Steve Rogers Aka Captain America, and although traditionally a male character he is just as beloved by many patriotic female fans.

While many characters have worn the mantle of Captain America it’s truly Steve Rogers who most embodies that title. He’s courageous, moral, honest, super strong, agile and determined.  Truly he is a superhero worthy of admiration and pride, and if you couldn’t have picked a better superhero to emulate.

So in bringing you a list of the best authentic Captain America costume ideas for women we could find we tried to be thorough. All of the outfits we’ve selected look truly amazing and sexy, and while we tried to only select items that came in a large variety of sizes including extra large and were rated positively, that just wasn’t possible as a lot of costumes were only available up to a size large. So we did include a few with either no comments or unfavourable reviews because they came in an extra large size, because we’re about trying to find a Captain America costume for every women to look sexy in and have a fun time aswell, whether you are thin and petite or plus size. The costumes have two distinct style, ether they are a form fitting body suit or they involve a dress or a skirt, but one thing they have in common is that all have an incredible blend of red, white and blue just like the star spangled banner, costumes just don’t get any more American than this. And just remember if you want to be all you can be in your costume , they don’t come with a shield so you’ll have to buy one separately.

This first outfit is probably the best women’s sexy Captain America costume on this page, it’s a blue metallic blue body suit with a red and white corset and white star on the chest, and it really does look just like Cap’s suit. This costume is made from a blend of nylon and spandex and has been reviewed by lots of happy people, they really love it and had lots of glowing things to say about it, which is the reason for it’s inclusion on this list, but unfortunately it is only available up to size large(which is why we included the next costume for larger women). But if it is available in your size this could be the best Captain America costume that we found.

So we thought this was the best plus size Captain America costume for women because it’s a very cool and traditional take on the tradition Cap suit and is very similar to the first costume, a great blue body suit made from a blend of polyamide and spandex with a large white star emblazoned on the chest and a very striking red and white corset which really sets the costume off nicely. It only had a few reviews but they were very positive although they both mentioned the costume runs a little small, and although the image linked below only has medium and extra large available other sellers have additional sizes available if needed. On the whole we thought it was a very sexy outfit suitable for both petite and plus size women and everyone in between. 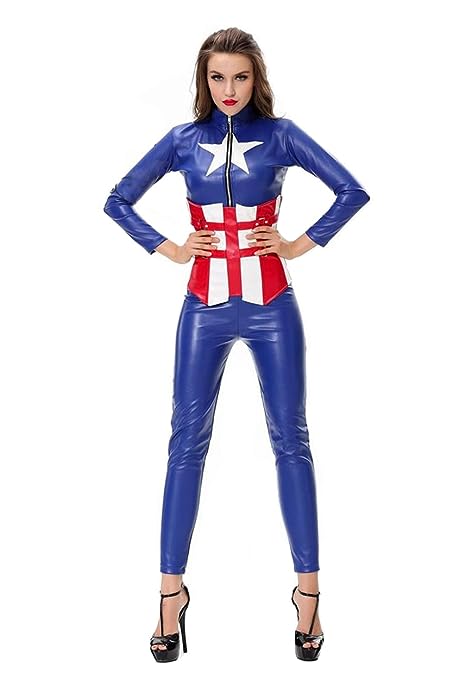 Another gem we found was this incredibly sexy plus size Captain America costume available in a wide variety of sizes including extra large, the costume itself is a red, white and blue metallic jumpsuit with headband that will no doubt in anyone’s mind that you are the real Captain America, just sexier. A lot sexier. Although it hasn’t been reviewed it does look amazing and may be worth considering. 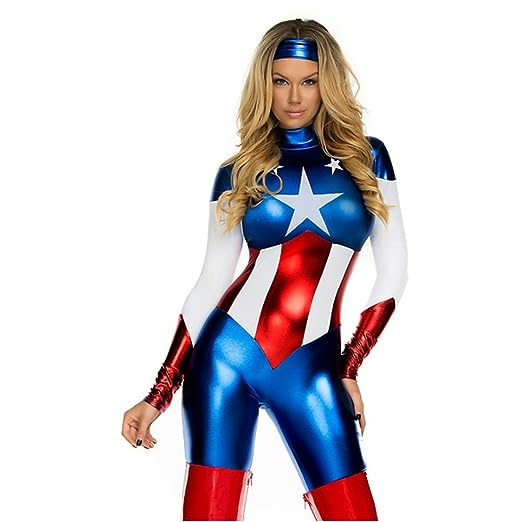 So here we have another women’s authentic full body Captain America costume which really looks the part, again it is a metallic red, white and blue jumpsuit emblazoned with a large star on the chest and smaller stars on the arms and legs, and to complete the outfit is a cute little authentic eye mask complete the capital ‘A’ and little American wings just like the real Captain America’s mask. While a lot of people were very happy with costume, the reviews had one constant theme, the costume runs small so you may to order a size bigger to ensure abetter fit. That complaint brought the overall rating of the costume down significantly. Also it is not available in extra large. 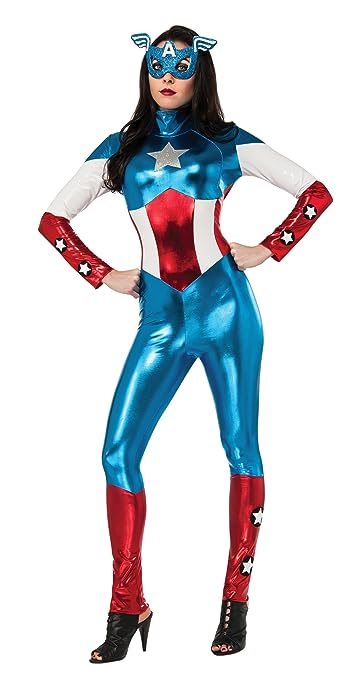 This cute Captain America costume for women is a little red, white and blue sleeveless tutu dress that come complete with red gauntlets and a nice little mask with American wings. Perfect for those who want to dress up without going to a lot of a hassle. A simple and fun outfit it received good reviews but unfortunately there were size issues that dragged it’s rating done again, the consensus was that the length was a bit short and that the fit was a bit small, so if you like this costume and are interested it may be worth reading the reviews for tips when ordering. Also it is not available in extra large 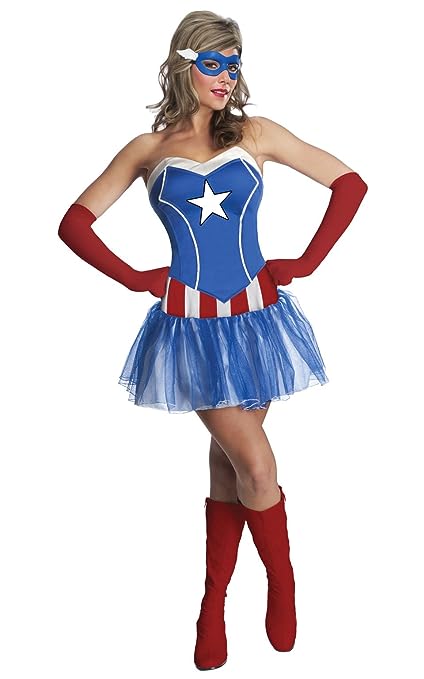 Finally we have this really simple Captain America dress costume idea which is so cute. A perfect outfit for those who want a simple and easy costume idea, this sleek red, white and blue dress is an quick and affordable answer. Very popular it’s received lots of really positive reviews with most people saying how good it looked and how comfortable it was, with some commenting it is a little short so maybe not for the too modest or perhaps think about ordering a size up. A great little dress but unfortunately not available in extra large.

This nice realistic women’s Captain America plus size dress looks fantastic. It’s a blue metallic dress with red and white mid rift and white star on the chest area, made from a blend of polyester and spandex. It also come with winged mask and red gloves to give the costume that extra edge. Unfortunately while the picture looks great and the styling looks awesome it has only one review, and that one review is very negative. So the real reason for it’s inclusion in the list is the fact that the image below is available in extra large, it is also available in other sizes from other sellers on Amazon. 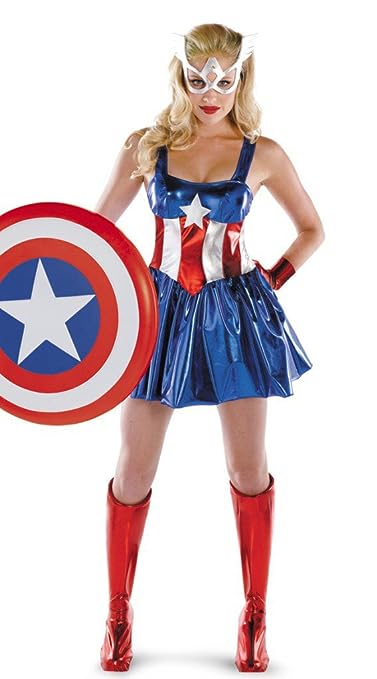 So we thought we’d have a look on You Tube and see if we could find something to give all you girls some ideas and inspiration to draw on and we found this great sexy lady Captain America cosplay clip, which we though was great and full of ideas and hopefully you’ll find it useful aswell. Enjoy.

Have fun ladies dressing up as one the most iconic superheroes ever, the legend started With Steve Roger who tried to join the army in the midst of World War 2, but was rejected due to his frail physique and poor health, but because of his determination to serve his country he came to attention of prominent German scientist Dr Eskine who was conducting experiments for the American government to help combat the Nazi’s. And after successful treatment Steve Rogers became the world’s first super soldier and fought in the remainder of the war until he and his sidekick Bucky Barnes were lost on a mission near the end of the war and presumed dead. But both would survive, with Captain America being found decades later by the Avengers frozen in ice, and because of his famous exploits he was asked to join and granted founding member status. Incidentally Bucky Barnes also survived and would be brainwashed to become the infamous mercenary and assassin the Winter Soldier(and would even be Captain America for a time).

At Superheroes Central we’re all about giving comic book fans what they want, so if you didn’t find a sexy female comic book superhero that was right for you on this page we also have sexy costume pages on Wonder Woman, Batgirl, Supergirl, Black Widow and Iron Man.