At Superheroes Central we’ve found some of the best sexy and plus size Storm costume costumes out there. And by Storm we mean Ororo Monroe, one of the most powerful mutants in the Marvel Universe and some time leader of the X-Men, uncanny as they are. It’s impossible to overstate just how popular and important Storm is to fans, as one of the first and most prominent black super heroines she has had a massive following from the beginning and in the Marvel vs DC crossover event she was able to defeat Wonder Woman due to a popular vote by fans(and because she’s awesome). What’s not to love? She’s a beautiful and very capable woman able to control the weather producing lightning bolts and strong gusts of wind, her control is so complete that she is able to fly using to wind to support her. She even been worshipped as a goddess at various points in he life, and married the king of Wakanda T’Challa(AKA Black Panther), thus becoming a queen, and with the right costume so can you.

We have found some of the best X-men Storm Costume ideas for women, and as you would expect that because Storm has been around since 1975 and has appeared in comics, cartoons, video games and the movies there are quite a few different looks to choose from. The first costume is a great classic look that is straight from the comics, this is very retro look from the golden era of comics.  A really fun and sexy costume. Secondly we found this realistic costume modelled on the suit worn by the gorgeous Halle Berry in the original X-Men trilogy, it’s a more serious and contemporary and modern  look but still looks very sexy. And finally because we realise that women come in all body shapes we have found a Black bodysuit that is available in extra large sizes, the down side of the last costume is that it doesn’t come with Storm accessories but a few choice additions can make it a great X-men Storm costume.

While some of the costumes have Storm themed accessories none of them come with that iconic Storm wig, and unless your hair is naturally silver you’ll probably have to get one. Another feature that can really take your costume to the next level is a simple but cool looking X-men belt buckle.

This sexy Storm costume for sale is one loosely based on her first appearance in Giant Sized X-men #1 in 1975 and then updated and appearing in later X-men comics. Although the styling of this costume is still very sexy, it is somewhat more modest than Storm’s first costume, while retaining key design and styling elements. Made from polyester this authentic looking costume includes a black cat suit with gold trimming and accessories as well a realistic Storm headpiece. It got a fair amount of positive feedback from those customers who bought it, with people having a lot of fun and receiving a lot of compliments, although there is some mention of sizing issues, with a few people saying the costume runs small and others saying the ordered size was fine, just something to bear in mind(and if you had to the time order in advance with enough time to swap if necessary). Overall this sexy Storm costume for sale is a great buy especially if you want a retro and fun feel, just remember the wig is not included and you will  have to purchase one separately. 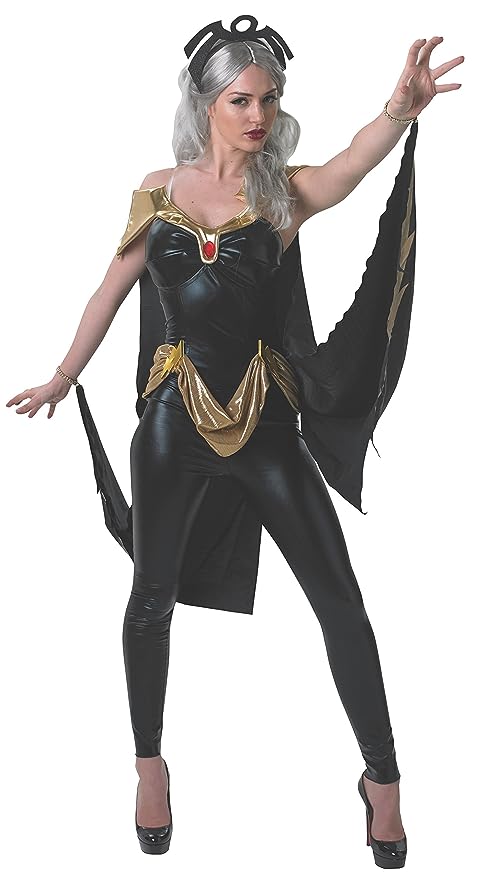 For those looking for a realistic X-men Storm costume this next costume is one worth considering. Before there was the juggernaut that is the Marvel Cinematic Universe there were a few awesome superhero movies that paved the way and convinced the powers that be in Hollywood that there was buck to be made bringing comic characters to life on the big screen. One such venture was the original X-men trilogy running from 2000 – 2006 starring Hugh Jackman as Wolverince, Patrick Stuart as Professor Xavier and of course the beautiful Halle Berry as Storm. This trilogy was a honest and realistic attempt to bring beloved comic book characters alive and make them seem real. And it worked. This authentic looking costume is based on the one from the movies and  includes a black spandex jumpsuit and satin cape. People absolutely loved this costume and it was hit for nearly everyone. So for a realistic X-men Storm costume that’ll get you looking as sexy as Halle Berry this is definitely worth a look. Just remember no wig included. 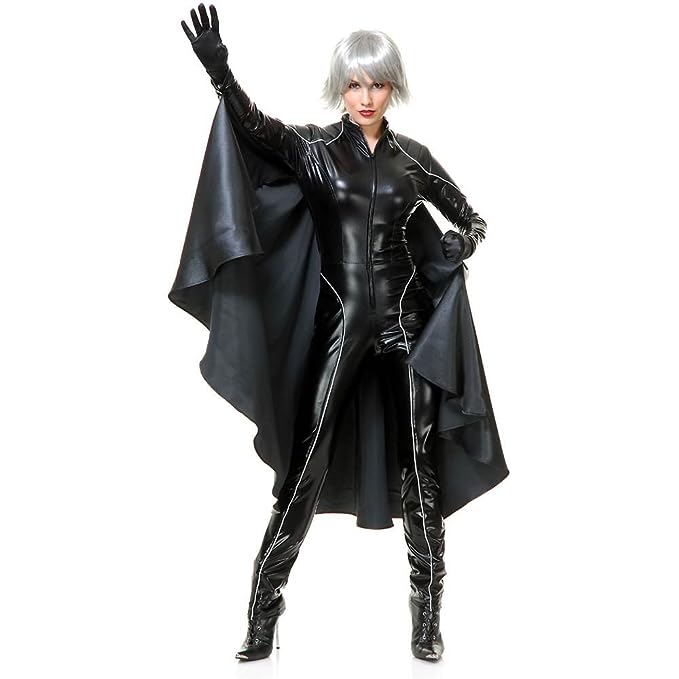 Finally we have this plus size X-men Storm costume for women because as we said we realize that there are a lot different body shapes out there. Obviously it isn’t a dedicated Storm costume, but it wouldn’t take much to make it a realistic Storm costume. Only three items are essential to giving it the authentic Storm look, a silver wig, a black cape(fastened at the wrists for dramatic effect) and X=men logo belt buckle, with these three things your costume is the real deal and you can be apart of the fun. Seriously though this black jumpsuit comes in sizes up to five extra large has a massive amount of positive comments from customers who loved it. And just remember there are other cool super heroines that have a black jumpsuit as the basis for their costume such as Black Widow and Catwoman (although technically she’s a super villain). Still this jumpsuit is an awesome idea for a plus size X-men Storm costume for women who just want to have some fun and feel sexy. 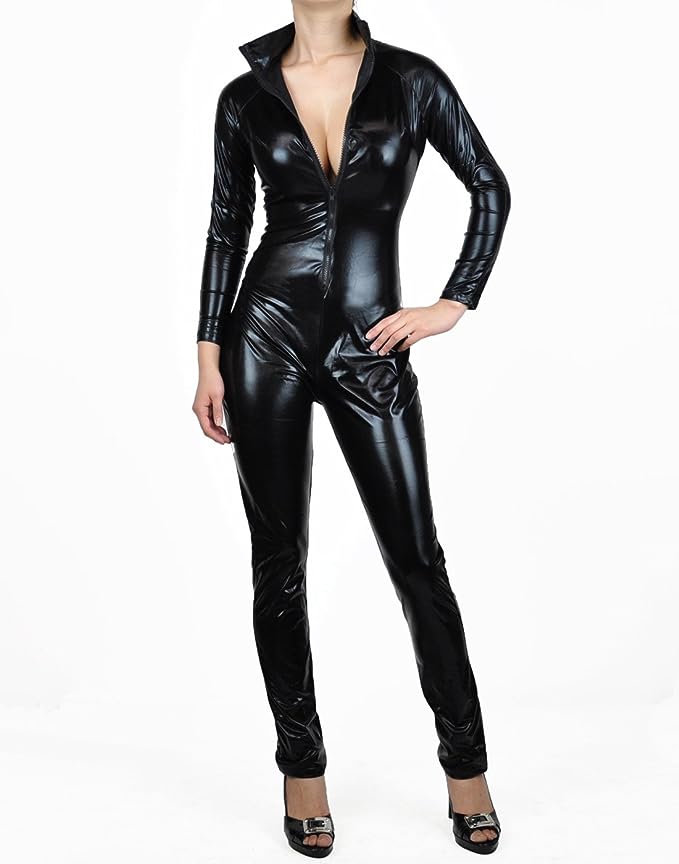 A Quick Look At Storm’s History In Comics

We found a great clip on You Tube that gives a quick look at Storm’s history in comics, the clip is perfect for the uninitiated as gives a brief rundown on her origins as well a look at some of her alternative appearances including the infamous Mohawk originally created as a joke in a comic redesign, but it stuck becoming such an iconic look worn  that it featured in the film X-men Apocalypse starring Alexandra Shipp as Storm. We enjoyed the video and we hope you do too.

So just who is Marvel’s X-men Storm? Well her real name is Ororo Monroe and she is the daughter of American photojournalist David Monroe and a Kenyan princess N’Dare(who was incidentally descended from long line of witch-priestesses, all of whom had white hair and blue eyes) Ororo was born in Harlem, New York, but the family later moves to Egypt where they live until Ororo’s parent are killed in an aircraft attack during the Suez Crisis, Ororo survives the attack but is buried under a pile of debris until she is rescued(the incident gives her Claustrophobia) At this point Storm turns to a life of crime on the streets of Cairo, where she becomes a pickpocket. Eventually her powers of weather control surface and she is worshipped as a goddess. Things change forever when she is contacted by Charles Xavier who is recruiting a new X-men team.

Storm is a powerful mutant who’s powers of weather manipulation allow her summon lightning bolts, create fog, and she is even able to fly utilizing strong gusts of wind. A hugely popular character and long time fan favourite, she has even been a X-men team leader on several occasions, even defeating Cyclops in duel for the position on one occasion(although to be fair to Cyclops there was as suggestion that his wife Madelyn prior used latent physic powers to influence the battle, Madelyn was a clone of Cyclops’s former lover Jean Grey who at the time was believed dead before being resurrected, hey it’s the comics). Storm has been a member of X-men and has at times served with other Mutant superheroes such as Wolverine and Deadpool(believe it or not). And if that’s not impressive enough she has even been a member of the mighty Avengers who’s roster includes iconic superheroes like Captain America, Thor, Iron Man, Spiderman, Hulk, Black Widow and of course Black Panther who she would later marry becoming Queen of Wakanda (until their marriage was annulled).

It’s fair to say Storm is a ground breaking and iconic character who will be with us for a long time to come.