At Superheroes Central we’ve put together some really authentic Robin costumes for adult for all the die-hard fans of the boy wonder. Robin first debuted in 1940 in Detective Comics #38 and was conceived by Bob Kane, Bill Finger and Jerry Robinson as a junior sidekick for the Batman as a way to attract younger readers, Jerry Robinson said that the characters name and original costume were inspired by Robin Hood of which he was a fan of as a kid. That might be the official reason of Robin’s creation, but some fans have a much cooler reason for Robin’s tenure as Batman apprentice. The theory goes that Batman has a plan in place to deal with all the members of the Justice league of America should they ever go rogue(which he has actually used and which someone else has stolen his plans and used, which kinda makes it a pretty dumb thing to do), the fan theory goes that Robin is Batman’s countermeasure to himself should he ever go rogue(well more rogue than is normal). Fans reason that with Robin’s intimate knowledge of Batman’s equipment, strategies and secret locations he becomes the perfect failsafe to stop the Dark Knight should he ever go too dark.

Robin Costume Ideas For The Adults

So because there have been so many versions of Robin, that means there are plenty of great Robin costume ideas for the adults to choose from. Because as you would expect for a superhero that’s over 70’s years old and has appeared in so many different mediums from the pages of comic books, on the screen, both big and small and has even made his way into video games, there have been a lot of changes made to his costume, because writers and artists want to put their own mark on the iconic costume. So we picked 4 authentic Robin costumes for adults that we really liked, first up we know that not everyone wants to go to a lot of trouble to get dressed up, but instead need something quick and easy so we found this great Robin T-shirt costume, which is a lot of fun. Next we picked a more contemporary version of the classic Robin costume (for the more modest fan), and then we selected an ultra modern look for the boy wonder that I’m sure plenty of serious fans will recognize. And finally we selected the original and most iconic Robin costume as seen in the comics and then on T.V in 60’s which people absolutely love, and will always love. It doesn’t matter how old you get you are never to old to play the boy wonder one of the these adult Robin costumes could be perfect for you.

What can we say about this authentic Robin cosplay costume for adults, the original (and in many people eyes the best), unaltered and left just the way Bob Kane, Bill Finger and Jerry Robinson conceived it, this costume has endured through the ages, and although fans of the comics know and love this costume, it really gained notoriety when worn by the ever exuberant Burt Ward in the classic cult television series Batman. Burt Ward did more than anyone else to bring the boy wonder off the comic book pages and make Robin both a real and relatable character. Ward’s version was a charming blend of hard hitting crime fighter combined with youthful naiveté, and wisecracking rejoinders as he played the excitable and sometimes rash sidekick to Adam West’s calm, moral and reserved Batman. Together they would foil classic super villains like the Joker and Catwoman. He was perfect.

So in this authentic Robin costume, you will be sure to evoke the nostalgia and popularity of those earlier times. It is a very authentic and faithful recreation, complete with eye mask, yellow cape, red Robin shirt with logo, green gloves and of course those green briefs and tights, and it also has boot tops to cover your shoes. People who bought this costume loved it and had a great time as you will be sure to do in this awesome Robin cosplay costume.

This realistic adult Arkham Knight Robin costume for sale is perfect for fans of the incredible visual spectacles that are the Arkham Knight video games. This version of Robin is Tim Drake who is a fan favourite, the costume reflects the darker and more dangerous world found inside the game in what fans call the “Arkhamverse”, the costume itself is a combined cape and hood with eye mask, aswell a red muscle chest piece, it also has a very authentic yellow utility belt, aswell long sleeved arms and pants complete with body armour prints on them. In fact the whole costume is far less about theatrics than is usual for superhero costumes and far more about offering better protection, in that it obviously is designed as high tech body armor. And so if you want to be a Robin that’s more about cool factor and less about nostalgia than this authentic and modern Arkham Knight Robin costume could be the one for you.

This next Robin costume for men is one that is most commonly associated with the third Robin, Tim Drake again and it is the best costume for the more modest fan. Right after the  death of the second Robin, Jason Todd, Tim who was a long time fan of Batman and Robin, actually discovered the secret identities of Bruce Wayne and Dick Grayson through some clever detective work of his own, as he noticed the original Robin using an identical  acrobatic manoeuvre that Dick Grayson of the Flying Graysons had used, and this along with Bruce Wayne’s adoption of Dick allowed him to make the connection. At this point in time Jason had just been killed by the Joker and Batman was being even more reckless and violent than usual(hard to believe I know) and fearing that Batman was of control Tim tried to convince Dick Grayson who was now Nightwight to resume his Robin persona as Tim felt that having a Robin sidekick would help centre Batman’s emotions. Dick Refused and Tim ended up a new Robin instead with both Dick and Alfred’s blessing. After initial misgiving Batman saw the potential in Tim as he was very impressed with his detective skills and intelligence and after insisting on some rigorous martial arts training welcomed him as the new Robin complete with a more modern costume.

So this fantastic Robin costume is made from polyester and has a great foam muscle chest emblazoned with the Robin emblem, the arms are also padded to give you that authentic superhero look. It also come with the classic small eye mask, and a black and yellow cape. Obviously the biggest difference between this costume and the original Robin costume is inclusion of long green pant legging as opposed to the green briefs and tights, and for the modest guys out there, it really does make it a great Robin costume for men. 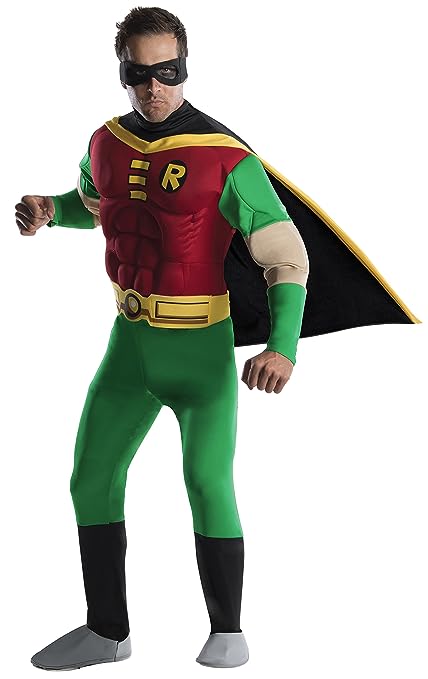 So lastly we have this really well done Robin T-shirt and cape costume for sale, it’s really simple and effective, a red polyester T-shirt with a muscle and Robin costume print on it, and when you add the short black cape and classic Robin eye mask it works really well, and is a great costume choice for men(or women) who might want to compliment their kids costume or just into the spirit of things without a lot of bother. The people who bought this costume were very happy with the product with it’s great price point and convenience, well worth your consideration. 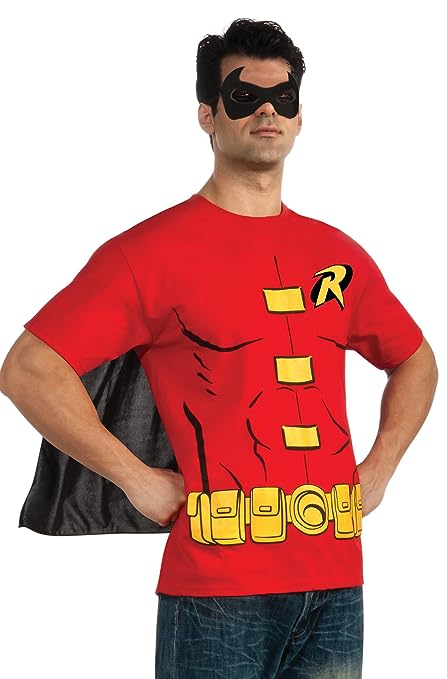 Who had the best Robin Costume

So by now it’s pretty obvious that there have been lots of different Robins, but who had the best Robin costume, well that’s something you’ll have to decide for yourself but to help you make up your mind is a great little clip we found on You Tube all about the different Robins. Have fun.

The Robin character itself is very enduring, and no doubt when most people think of Robin they think of Dick Grayson who was part of a family acrobatic circus act when his parents were killed by mob boss Tony Zucco’s men, who was trying to extort the circus. Batman then appeared to young Dick and explains that his parents were killed by criminals too, and that’s why he became the Batman, after hearing this, Dick asked to join Batman as his partner in fighting crime, and although reluctant, Batman is sympathetic to the boy’s need to avenge his parents and agrees. After months of rigorous and demanding training in acrobatics and unarmed combat  the two of them team up to successfully capture Zucco. Dick Grayson would be Batman’s partner and go on to fight crime alongside him for many years along with other superheroes such as Supergirl who developed quite a crush on him and Batgirl, with whom he would have a serious relationship, even becoming engaged at one point. But eventually Dick would grow up and adopt his own independent superhero identity Nightwing.

As we said earlier there have numerous incarnations of Robin apart from Dick Grayson, indeed Robin has even been a girl from time to time, notably Stephanie Brown(formerly the crimefighter Spoiler) and Carrie Kelly (a 13 year old girl scout that Batman rescued), another famous Robin was Jason Todd who Batman recruited after he tried to steal the wheels off the batmobile (cause that seems like a good idea right) anyway things would not work out for young Jason Todd who was kidnapped by the Joker and after losing a telephone poll amongst fans, he was actually killed in the 4 book story arc A Death In The Family. But luckily(or unluckily) Jason Todd would be resurrected via the Lazurus Pit (cause it’s the comics) and after becoming disenchanted with Batman’s seeming lack of anguish about his death, becomes the twisted and disenfranchised crimeboss/vigilante known as Red Hood, who has no problems killing bad guys. Even Bruce Wayne’s son Damien was Robin for a time until his death. So these are some of the more notable Robins but certainly not all of them.