Here at Superheroes Central we love superheroes  and so we have compiled a list of what we think are the best authentic and realistic Iron Man costumes for men on the market. Have a look a look through this list of great outfits and we are confident that you’ll find something that’s right for you, whether you are looking for a cheap and fun costume for a party or whether you want to spend a little more and really impress you friends with a life like Iron Man suit we’re confident we’ve found what you need.

First created in the 60’s as an capitalist anti hero targeted towards the peace and love movement of that time, Tony Stark was a character whose story was one of redemption and enlightenment. Tony started life as a weapons manufacturer whose main concerns were profits and technology, but after a routine inspection of his weapons in an active war zone goes horribly wrong and he suffers severe and life threatening injuries aswell as being captured by enemy insurgents, Tony’s view on life changes with sudden clarity and so after creating the first Iron Man suit to escape his captors, he turns his life around abandoning commercial weapon manufacturing and becoming one of the world’s most powerful superheroes.

Ever since Robert Downey Jr first graced the big screen as the armoured Avenger pretty everyone has become a fan, and so to help out those who want to wear the suit we’ve decided to make a list with some of the best Iron Man costumes ideas for the adults.  Iron Man’s armour has always been pretty been much red and gold in the comic books, and while there have been a few exceptions(the Iron Man Centurion armour which was red and white as well as the Iron Man Stealth armour which was black) most venders only offer versions of the standard armour.

So it really just depends on a few factors such as the amount of money you want spend, how much effort you want to put into your costume and what the occasion is. Below are costumes for the serious cosplayer, the casual party goer and for the just for laughs crowd. There various price and quality differences between all the costumes so have a look and see which Iron Man costume idea works best for you.

First up is a very realistic Iron costume that is made for the serious cosplayer. The suit consists of molded parts resembling armour, and includes chest piece, boots, gauntlets and a helmet. Looking at the images provided it’s hard not to be impressed at how authentic it appears. Although there are only a few reviews out the time this page was created it seems that people were very happy with their purchase despite it’s high price point and as you would expect received they lots of attentions and plenty of compliments on the costume. That’s the good, now here comes the bad. The helmet, compared to the rest of the costume it just looks oversized and out of place, with one costumer buying a better helmet separately. If this is something that you might considered were you to purchase the costume then we found this absolutely authentic Iron Man helmet that is so real looking you have to see it to believe it. The second problem isn’t as easy to fix, apparently it’s really difficult to sit down in the costume with one costumer pointing out that is it’s easier to put on the suit when you arrive at your destination(which presents it’s own challenges because apparently it takes awhile to put on). Without a doubt this is the best and most realistic Iron Man costume for the serious fan where expense isn’t the key factor.

This next outfit is an authentic looking  and is great suit for those want a more 3-Dish look without spending tons of money. Based on the Marvel Universe film Captain America: Civil War it’s made from polyester this jumpsuit not only has a printed design on it but also has a padded chest plate, shoulder guards and padded mid rift as well dimensional boot tops and gauntlets that really set this costume off giving you the appearance of wearing an armoured suit. The customer reviews were somewhat mixed with most people loving the costume and having a great time and getting lots of attention, there were unfortunately quite negative reviews with people complaining about how hard the costume was to get into saying it ran small. So when ordering check the size chart and perhaps think about the extra large size if you are in doubt. Another point is that the mask is only a face mask(and not a helmet) and although it comes with gauntlets it does not come with gloves, which is a distinction that some people missed when ordering(understandably so), if you want gloves remember to buy them separately. But this authentic Iron Man costume is a great compromise costume balancing price point, quality and realism. 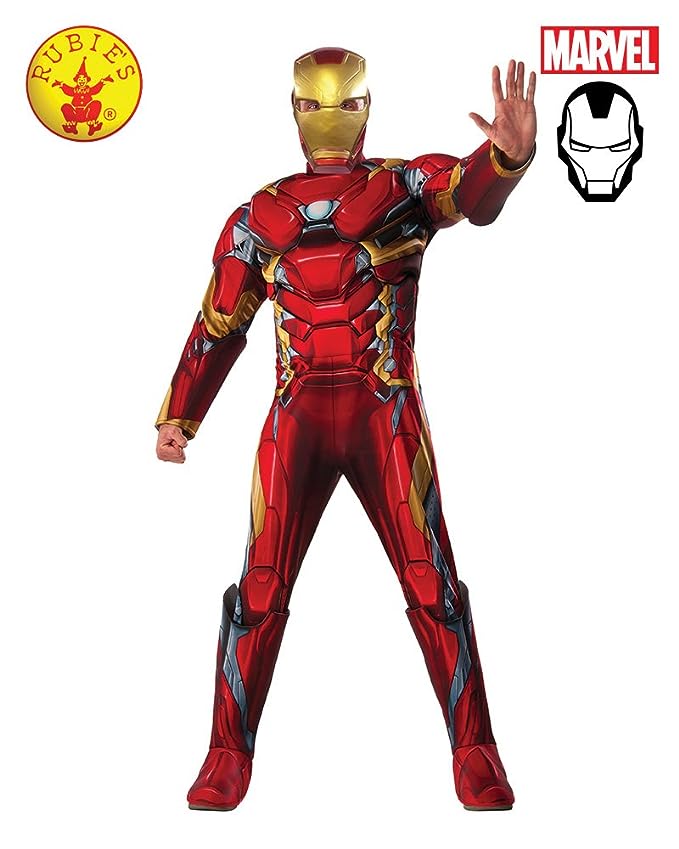 Simply put this is the best Iron Man for long time fans or the armoured Avenger, inspired by comic books it is such a simple yet authentic costume, this polyester jumpsuit printed in the likeness of Iron Man’s comic book armor, it has a padded muscle chest for those of us need the extra boost to help shape our physique to heroic proportions. Judging from customer reviews everyone had a good time with it with no one having a bad word to say about it.

The mask is only a front face mask but really suits the style of the costume. people who bought this outfit loved it and that was reflected in comments section, a good buy and definitely a great choice for those who remember the Iron Man from the comics with fond nostalgia. It’s simplicity and sense of fun is what make this the best Iron Man costume

Sometimes we just want all the fun of a costume party with friends and family without going to a lot of trouble, so here we have a cheap t-shirt with an iron Man print on when combined with a cool mask does the job without all the bother. Not much to say about this one except that most customers who bought were very happy with it, and that it comes in various sizes although there was one theme that ran through the customer reviews and that was although the t-shirt was advertised as a polyester one what they received was a cotton t-shirt and they had some shrinkage’s after washing something to think about when ordering the size right for you. Simply one of the best cheap and easy Iron Man costume ideas.

Tony Stark is a genius there’s no doubt about and in the movies they’ve certainly kept him busy, they’ve given him heaps of variations of the Iron Man armor and heaps of fun and cool ways to suit up. This You Tube clip showcases some of the best authentic and realistic Iron Man armours. Everything from the original bulky prototype, unmanned drones and the ultimate fighting version of the suit, the Hulk Buster armour. Have a watch and enjoy.

Who is the real Iron Man

Who is the real Iron Man? First appearing in 1963 for Tales of Suspense he was the creation of Stan Lee, Larry Leiber and Jack Kirby with artist Don Heck creating the distinctive red and gold armour. Simply put Tony Stark is Iron Man, Tony was a child genius and prodigy, the son of millionaire industrialist Howard Stark and his wife Maria. Following the death of his mother and father at a young age Tony took over his father’s business empire and using his considerable intellect continued in the family business of designing and selling weapons. It was during an overseas weapons test that Tony’s life would change forever. In an undisclosed war zone during a routine test Tony was critically injured kidnapped by rebels and taken back their base. Near death it was up to another prisoner, the world renowned noble prize winning physicist Ho Yinsen(who luckily for Tony just happened to be there) to help save Tony’s life. Together they constructed a powerful electromagnet that stopped deadly pieces of shrapnel from reaching Tony’s heart. When his conditional stabilised, together they secretly constructed an armoured suit to escape. Unfortunately they needed more time, and so Dr Yinsen sacrificed his life for Tony by distracting their captors long enough to finish the armour. And Iron Man was born. After avenging Dr Yinsen and escaping  he returned to the united states where stopped producing weapons and turned to more humanitarian efforts. Tony constantly creates and upgrades the armour and has multiple versions for multiple different purposes.

Iron man is a real hero and a great choice for a choice for a costume, he has been incredibly popular since his introduction over 50 years ago, since readers first met billionaire Tony Stark and followed his adventures, through both the ups and downs. What really appealed to comic fans was the fact that unlike many other superheroes he wasn’t born with any special powers, his true gift was his genius intellect with which he crafted an armored suit unlike any the world had ever seen before and became one of the most powerful forces for good on the planet, and along with Captain America, the Hulk, Ant Man, Wasp and Thor founded the Avengers(a group of Earth’s mightiest heroes including heroes like Hawkeye, Spiderman, Scarlet Witch and Black Widow) . So captivated have people been with the golden avengers story that he has been brought to life in several block buster films, so if you would like to read more about how it all started for Tony Stark go to Iron Man’s original story. Or if you have a girlfriend or wife you want couple costume with we have a great page of sexy and plus size Iron Man costumes for women.